In the UK, a Personal Protection Officer working for a private client, has no lawful authority or reasonable excuse to carry anything that is intended for use in the defence of an attack on their Principal. To successfully defend the Principal when attacked, is the Protection officer’s sole aim ;but if they use a baton to achieve that aim, they will be arrested, embarrassing their Principal and risking prosecution.

In many other countries, PPOs may be authorised to carry lethal and non- lethal weapons. Firearms, pepper/ CS spray, Taser or Batons are all legal with proper licensing, but not in the UK.

In the UK, our best Personal Protection Officers will strive to predict threats, avoid routines and rely on enhanced situational awareness to steer their Principal away from trouble before it becomes a risk. What happens if the attack is unforeseen or unavoidable?

A new option is now available that bridges the gap!

Eden Private Staff and Security has had a long and reciprocal friendship with Selecta DNA and Selectamark, the company that has revolutionised forensic marking systems. I personally, recommend their products to clients following Residential and Business Security Surveys for asset marking and deterrence to burglars. They have now adapted their forensic marking system to create a brilliant tool that I believe will become a real asset to all Personal Protection Officers.

SelectaDNA Defence Spray,  looks like a pepper spray but is completely harmless, therefore cannot be classed as an offensive weapon. It sprays a water based solution which is fluorescent under UV light and contains a unique synthetic DNA code that Police can use to place a suspect irrefutably at the scene of an assault. 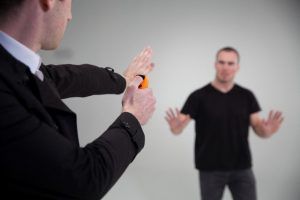 Imagine a scenario where the Protection Officer is confronted by an aggressor who intends to assault the Principal! The production of a handheld device that looks like pepper spray may be enough of a deterrent to make the attacker think twice. If he continues with the assault, the shock of being sprayed would create a moment where the Protection Officer can break away from the incident whilst the assailant composes themselves. The likelihood is that the confusion will make them withdraw and run away.

The ensuing Police response would commence with a local area search for suspects matching the given description of the assailant.

Police powers to stop and search would be used to question any suspects when apprehended. Using an ultra violet torch, the Police can identify the perpetrator, because they will glow under UV light if sprayed. The DNA code can be recovered as forensic evidence that the suspect was at the scene of the attack and sprayed by that CPO’s device.  Even if the perpetrator is not arrested in the immediate search, the forensic DNA spray will mark the assailant for weeks, affording the Police an enhanced chance of apprehension in the longer term. 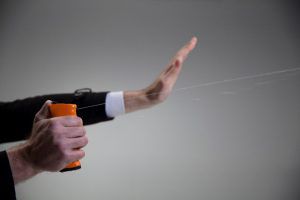 Many Police Custody suites in the UK use UV light on all arrested suspects entering the facility. If a suspect is processed for a crime and glows under UV lamps, the unique code on their body and clothes can identify them as being involved in other crimes as well, for which they can subsequently be investigated. This forensic evidence will support a prosecution.

If you have need of a Personal Protection Officer or team, please contact Rick Mounfield, Eden’s Chartered Security Professional.

10 Reason to hire a Chauffeur Personal Protection considerations are a “duty of care” during employee dismissal meetings.

Eden Private Staff remain open and committed to providing an exceptional level of service. Our team are available for calls and enquiries and at this stage still able to help you and your family find the right personnel for your requirements. We will be introducing candidates via video calls and following the latest guidance from the government
+ +
We use cookies to ensure that we give you the best experience on our website. If you continue to use this site we will assume that you are happy with it.OkRead more