Eden Private Staff would like to Introduce to you all the new Head of Security, Rick Mounfield MSc FSyI.

Rick Mounfield Completed his Career in the Royal Military Police in 2011 as a Regimental Sergeant Major. His 22 year career saw him deploy operationally for an accumulated 7 years. His Close Protection specialisation meant he deployed in small teams to protect British Ambassadors and senior Generals across Africa and the Middle East. In recognition of this, Rick was awarded a Meritorious Service Medal in the New Year honours list 2011. Since leaving the Army, He has completed a Master of Sciences Degree in Security Management with Loughborough University.

Our Q&A session offers an insight into the man who will drive Eden’s new security services.

Int: Rick, what did you do in the British Army?

I was employed in the Royal Military Police (RMP) which is the Police force for the Army. As such, I was initially a Police officer based in Army Garrisons across Germany, Cyprus and UK.

Operationally, however, I deployed on 14 six month operational tours between 1989 and 2001. That’s an accumulated 7 years of the 22 years that I served. Those tours began as regular Military deployments to the Gulf, Northern Ireland and Bosnia but in 1997, I trained as a Close Protection Officer and passed the rigorous 12 week course. From then on, my deployments were in small teams of specialists tasked to provide Close Protection for British Ambassadors and High Ranking British Generals in Hostile environments.

Int: Where have you been employed in the protection role?

I have had the pleasure of living in parts of the world that are considered, at best, fragile, often suffering with terrorist, tribal or lawless tendencies but underneath the problems, there is always something remarkable about each country. For example:

I lived beside the River Congo in Kinshasa. The University there has an Art faculty that is producing remarkable artists and sculptors that sell their creations at the thief’s market in the City. Some of my best most valued pieces of art were purchased there; oil paintings with a canvas made from the inside of a flour sack!

Whilst working in Algeria, I accompanied the Ambassador to Tindouf on a visit to meet the Sahrawi tribes that have been forced to cross the border from Morocco as refugees. I always find that the people in these fragile states are predominantly very generous and peaceful, however it is always the minority of radicals that ruin everything. Algiers was the equivalent of St Tropez in the 1920s and the architecture is stunning.

In Sudan, there is so much history. I travelled into the desert of Abu Klea to the site of the famous battle and to Omdurman where General Gordon was killed. However, travelling west to the Chad border was one of the most hostile and sinister places I have ever been. Darfur is beyond the reach of any rule of law and the closest place to a post-apocalyptic scenario I have ever witnessed.

I also led a 5 man CP team in Baghdad with a countrywide remit to protect the senior British General in the Multi- National Force. I had the pleasure of being team leader for two “3 star” Generals. That role was not a regular Army deployment, but did have the benefit of coalition backup wherever we travelled. Something I could not call upon in other deployments.

Int: How have your experiences influenced your development into Private client security?

As a police Officer and later in my Career as an investigations manager, I understand how to design out crime. The Close Protection of high profile figures gave me a real understanding of how security can seriously restrict life if you allow threats to dictate your actions. My Ambassador in Sudan was a single lady who refused to allow the threats to restrict her life. She had a diplomatic mission and she pursued her objectives courageously. As her Protection team leader, I empathised with her and ensured that with proper contingency planning and unpredictable travel plans, we could facilitate her mission. She trusted her team to protect her and focussed on her work. I apply this experience to all clients and their families today. Security should never restrict what you want to do, but it should facilitate your wishes in a manner that makes you feel safe and confident in your security.

Int: With such a wealth of experience, why did you feel the need to embark on a Master’s Degree?

I am a big advocate of continuous professional development. I had a lot of vocational experience but that was limiting me and the advice I could offer. I commenced an MSc in Security Management with Loughborough University in 2011 and Graduated in 2015 with a Merit.

The course was enlightening. I read hundreds of books on topics I knew nothing about and more that challenged what I did know about. Whilst I still specialise in protective security and physical security, I now have a passion for Designing out crime principles such as Crime Prevention Through Environmental Design (CPTED) and defensible space theories. I apply these concepts when conducting security surveys of residential properties. I am also competent on Cyber threats, Criminology, Fraud and business management. I am a fellow of the Security Institute and aspiring to achieve the highest accolade of Chartered Security Professional (CSyP). As with any trade such as accountancy or engineering, chartered recognition is the pinnacle. There are currently only 103 Chartered Security Professionals in the World and most are employed in Corporate roles.

In the past 5 years since I retired from the Army, I have seen many examples of a Close Protection officer or security officer promoted to head of security for a high profile family. The real life and reputational risks of employing someone who is out of their depth in security are potentially life threatening. There are security professionals available who are extraordinary in their capability and knowledge. It is only a matter of knowing where to look.

Int: How do you plan to build Eden’s security offerings?

The foundations have been laid with the framework of services that will dovetail with each other to mitigate any perceived risks to a client and their family.

Security Managers will be the personal security advisors, the facilitators and the knowledgebase that a family can rely on to pull all the moving parts together, whether that be travel arrangements or secure IT/ phone platforms. They will be highly experienced influencers that will add huge value to the security and running costs of a wealthy family group.

Close Protection Officers and teams if required will ensure personal protection is assured. The personnel allocated will be personality matched and key enhanced skills applied as required. That may be languages, higher medical training or even a personal fitness instructor who is also a CP Officer!

Residential Security teams will ensure that your home is protected 24/7. They will have contingency plans in place for intrusion, Fire, illness or any concern specific to a client or the residence. An RST can be very formal in presentation but if placed in a family home with children, we adopt a much softer approach that will not intimidate the little ones.

Event security officers can manage the safety and security of your party, wedding or show. With politeness and a quiet confidence, a great security team can enhance your guests experience whilst an ignoramus can just as easily ruin it.

I will personally devise and conduct the Residential security surveys. It has been my passion for years. I see an estate as a security puzzle. I enjoy blending cutting edge technology with the inexpensive modifications to create a security profile that is unattractive to criminals, difficult to penetrate and ensures that the residents are safe in their home.

Eden’s recruitment process has seen the security database swell with the best candidates from across Europe, with others located in the USA, Various South American countries and many other nationalities. All have been screened to a British standard (BS7858). We are already receiving requests for security officers.

Int: What if an employer wants to screen a candidate beyond BS7858?

Eden now has the capability to conduct investigations into a person’s background either covertly via open source data scraping or overtly with their permission as a precondition to employment. There are various levels of depth from basic to a developed vetting standard. Whether the candidate is a nanny, house manager or security officer the insider threat can be minimised with enhanced background screening.

Int: In summary Rick, what are you looking forward to most in this new role?

Having the opportunity to sit down with a family, help them prioritise their security concerns then work out how to mitigate those concerns so that they can go about life without the burden of fear.

Eden is a great Company and I know my teams will augment the outstanding work that is already being displayed across all the staffing areas. 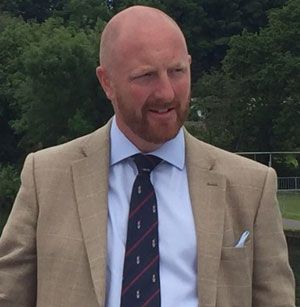 contact us
Eden Private Staff remain open and committed to providing an exceptional level of service. Our team are available for calls and enquiries and at this stage still able to help you and your family find the right personnel for your requirements. We will be introducing candidates via video calls and following the latest guidance from the government
+ +